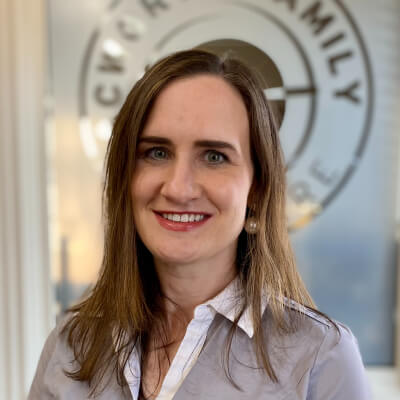 Dr. Pamela Schagren (formerly Dr. Shepard) grew up in Collinsville, Alabama. She graduated with Honors summa cum laude from the University of Alabama in 2004, where she concentrated in Biological Sciences. After receiving her Bachelor of Science, she continued to Optometry School at the University of Alabama at Birmingham. While there, she was involved in the Gold Key Honor Society and served as President of the Optometric Honor Society Phi Beta Sigma. She also was a member of SVOSH, a volunteer organization that served the needs of underprivileged patients in the United States and abroad. While a student at UAB, Dr. Schagren completed rotations at Veteran’s Affairs hospitals and an ophthalmology practice that specialized in refractive surgery. She also received extensive training in primary care, pediatrics, and contact lens fittings.
Upon graduation in 2008, Dr. Schagren received the Alabama Optometric Society’s leadership award. She then began a residency in Ocular Disease at Omni Eye Centers of Atlanta, where she further developed her ability to treat various ocular conditions and care for pre and post operative cataract patients. While at Omni, Dr. Schagren served as an emergency on call eye care professional for over 400 optometrists in the Atlanta area. In addition to treating various ocular diseases, Dr. Schagren has also taught dozens of optometry students from around the United States and Canada through lecturing and clinical encounters.
Dr. Schagren began working in the Atlanta area upon completion of her residency in 2009. She joined Acworth Family Eyecare in 2022. She is an active member of the American Optometric Association and the Georgia Optometric Association. Dr. Schagren previously served as president of the Greater Atlanta Optometric Association. In her spare time, Dr. Schagren enjoys traveling and spending time with her husband and two children.
DrSchagren@acwortheyes.com
Request An Appointment
Patient History Form
Email Us